Taken from The Press & Journal

Joint owner of the SYMPOSIUM coffee house chain, Paul Haggath, 41, was preparing for a day out with his wife, Wendy, on Saturday when he suddenly suffered a stroke and blacked out.

According to figures released today by Public Health England, the co-owner of Peterhead’s Symposium coffee house is just one of the thousands of middle-aged men who will suffer a stroke this year.

But thanks to the quick actions of Mrs Haggath, who recognised his symptoms immediately after discovering him, he is now on the way to making a good recovery. Last night, she said: “He had gone to have a shower and he was taking ages. I thought ‘what is he doing?’

“We were supposed to be going out. I let myself in and he was on the floor totally incoherent, totally unresponsive.”

“I looked at his face and it had obviously drooped and his side was all really rigid and I just thought to myself ‘he’s had a stroke’.

“So I just phoned 999 straight and the ambulance came immediately.

“They blue lighted to Aberdeen and got a brain scan done.”

Mr Haggath is now at home recuperating and Mrs Haggath said medics are now trying to work out why he had a stroke.

She said: “He’s fit and healthy, he’s not a smoker, he’s not a big drinker and he has an active life. “Paul is only 41 so they are doing loads of tests to find out more.  They have done heart scans and MRI scans.

“We’re a busy family, but it has just knocked us for six a wee bit.  We’re taking it one day at a time. We’ve got four young girls and they were all home on Saturday, so it was a bit of a shock.” 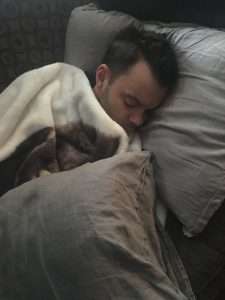 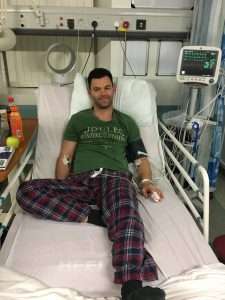 Juliet Bouverie, chief executive of the Stroke Association, said: “We have said time and again that stroke devastates lives in an instant.

receive all the latest updates